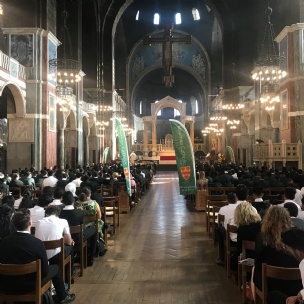 Newman Catholic College , formerly Cardinal Hinsley High School celebrated its 60th anniversary with a wonderful mass at Westminster Cathedral on October 10th 2018
Over 1000 students  and staff, past and present were joined by old boys, governors, representatives from the Westminster Diocese, Brent Local Authorit , the Metropolitan Police and Dawn Butler our local MP.  Mass was celebrated by Bishop John Wilson and Fathers Stephen Willis and Vincent Dike from Our Lady of Willesden ( The Shrine ) in Harlesden , NW10. The celebrants were also joined by Fathers Marcus Winter from The Carmelite Monastery Ladbroke Grove and Father Michael Donaghy (ex Cardinal Hinsley Staff member now based at the Cathedral)
The congregation assembled in an atmosphere of immense joy as 12 coaches dropped off the students and joined with the 200 Sixth Formers who had travelled to the Cathedral by tube. In glorious sunshine we filed inside to the beautiful sound of NCC's steel pan band. Bishop Wilson implored us to “ be great “, whilst Headteacher, Mr Coyle reminded that John Henry Newman’s “ Heart to Heart “ was a message that crosses the expanse of time and unites all of humanity. By common consent however the most powerful and inspiring words were those of the students themselves . Following bidding prayers in the many languages of this proudly diverse school a groups of students spoke of how Newman Catholic  College had supported them as immigrants and refugees from other parts of the world. Many of these young people were from Muslim or Hindu backgrounds and gave moving and compelling testimony to how the presence of God at NCC had supported their development.
The 60 years since 1958 have witnessed many changes in the Harlesden area. As a Catholic school it has has often been challenging to adapt to these transformations. The magnificence of our celebration however gives great confidence that we are on the right path and reminds us that whatever the difficulties ahead we can , in a spirit of love , joy and mutual respect , always prevail.
Daniel Patrick Coyle

"I just wanted to say what a privilege it was to be able to join you for your celebrations yesterday – and to thank you for inviting me! The witness of the sixth formers was so powerful and such a testament to the fantastic work you do at Newman College. All the pupils were a credit to you and carried off their roles with such aplomb - their pride in their school was tangible and it says so much about your community that the pupils have the confidence to rise to the challenge of reading or serving in such an imposing edifice!"
Jane Goring, Chief Inspector of Schools Diocese of Westminster

"What a wonderful event. I was so proud to be associated, if long ago, with the school, staff and boys. I know from experience the amount of work and planning that is necessary to organise an event on such a large, especially the behind scene worries. The day proved them all worthwhile. Every thing worked like clockwork. I was especially impressed by the multilingual bidding prayers. In my day we might have managed four. " Mike Robbins, Deputy Headteacher Cardinal Hinsley 1978-1987

"Thank you for inviting me to be part of your 60th anniversary Mass yesterday. It was a lovely celebration, and I’m sure you can all feel proud of the way the students behaved throughout. The testimony from the students from overseas was especially memorable, particularly the girls. In the context of a predominantly boys’ school they are doubly “foreign”, and could so easily be doubly disadvantaged. I’m sure I wasn’t the only woman present who was especially impressed by those girls who said they felt respected – we all know that sadly, that could so very easily not be the case. So extra kudos to you and all the staff for creating an environment in which they can feel safe and respected. Looking forward to being part of the next decade! " Sr Silvana Dallanegra rscj, Development Worker Caritas Westminster

"Wonderful and blessed 50th anniversary @NCCbrent. So proud of the progress and dedicated teachers at our school in Brent." Dawn Butler MP Brent Central 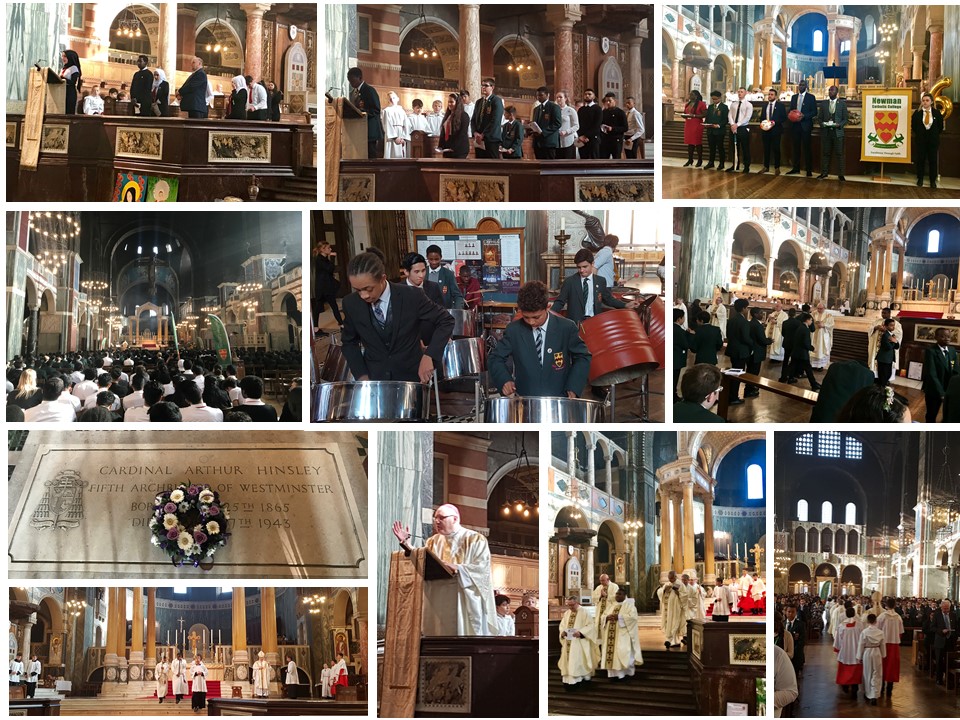