Student Council visit to the House of Commons June 14th 2016 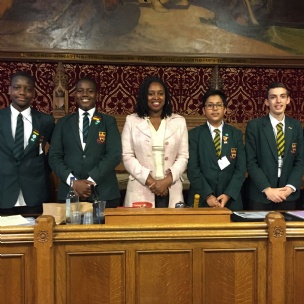 On June 14th 2016, Newman Catholic College made history as their Student Council were the first Brent Central School to hold their meeting at the House of Commons with Dawn Butler their MP.

We have made history in Brent Central holding our Student Council meeting at the House of Commons.
Newman Catholic College Student Council are the first Brent Central School to hold their meeting at the House of Commons with Dawn Butler their MP. In addition to their normal meeting business students were able to ask Dawn questions of their choice.
When asked about her vision for the young people of Brent, Dawn said she would like to see more young people doing well and achieving either through studying, apprenticeships or working in a job.
Dawn would also like the Streets of Brent to be safer
Brent is such a diverse borough that young people are important in  breaking down barriers so we are united as a community and we grow stronger in fairness and equality
What do you have to offer for youth in Brent?
Dawn wants to see services and facilities for young people and she wants young people to be young and enjoy themselves and do it safely
Dawn spoke students being aware of their Social media profile. They need to know how what they do now on social media can affect them in the future
The EU referendum was raised. Students showed whether they would vote to stay out/in and then explained their reasons for their vote to Dawn.
Our students asked Dawn...
What have you done in the area since you have been in office? Dawn has been actively involved with the, Fuel campaign, Crime summit and  she has supported and attended many local events
Dawn's end goal is Continuing as much as she can every day to ensure Brent is a better place.
Dawn encouraged students who are interested in politics to come and volunteer in her office and see what it is like. There are 300 cases every week and lots of enquiries .
Dawn's closing words were that it is "Important that students do well and progress so everything they do reflects the country we live in."

Some quotes about the visit...
"We were afforded a unique opportunity to discuss our questions with our local Brent MP Dawn Butler about community concerns such as housing, education, and the EU Referendum. Visiting such an important historical landmark and the centre of our political institutions was informative and inspiring." (Joao Coelho Year 11)

"It was like once in a lifetime opportunity. I felt lost in history and it was an honour to meet Dawn Butler." (Swasitk Dilip Year 10)

"I feel honoured to be given this opportunity. It was an amazing experience and surreal to be able to ask a real politician questions."( Mukhtar Danbatta Year 10)

"The best opportunity I have been invited to. I literally felt like an PM. (Kadeam Taylor Year 10)

"It was amazing to see the boys excited about politics. It was my first time, along with many others going into the House of Commons, and a chance we may never get again. To be able to give the boys this once in a life time opportunity is thanks to Dawn. It was a brilliant day." (Miss O'Connell staff)

"I thought it was a phenomenal experience and privledge to be part of the first school inside of the House of Commons. It was a huge success and Dawn Butler was very open and honest and the students experienced one if not the best student council meetings ever." (Mr King Staff)